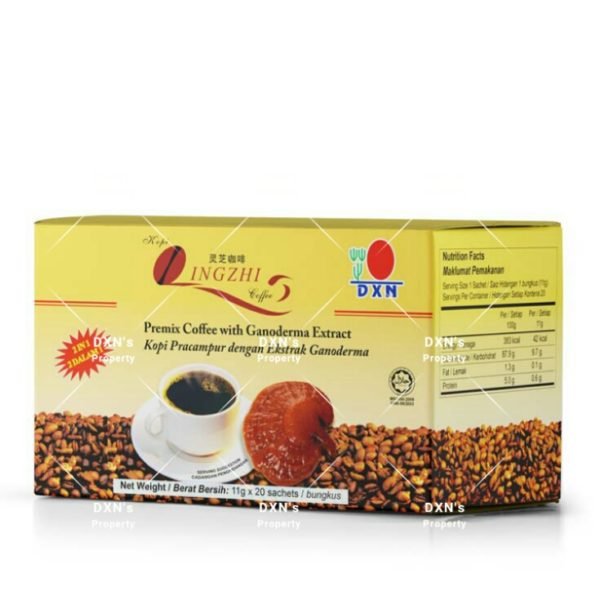 DXN Lingzhi Coffee 2 in 1 ر.ع.3.50
Back to products
Next product 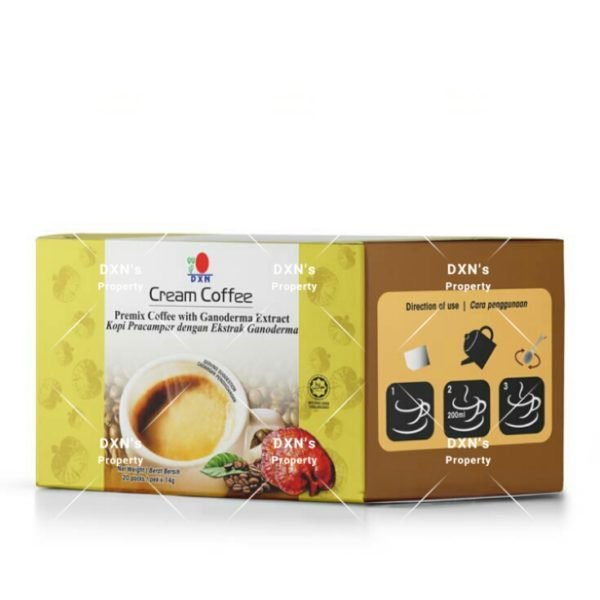 DXN Cordyceps Coffee 3 in 1 is specially formulated from instant coffee powder added with Cordyceps extract. This unique formulation makes a smooth and aromatic coffee to zest up your day.

– Enhancing and strengthening of the immune system
Cordyceps will increase the number of the Natural Killer Cells, which are responsible for the body defense against viruses and bacteria. Some trials show that the fungus works effectively in the leukemia stricken individuals.

– Improving sexual function
In men and increasing libido by stimulating the production of sex hormones. Cordyceps may also be a means for fighting female infertility.

– Building muscles and improving physical performance
Some Chinese athletes, who use Cordyceps, tend to show better results than the other sportsmen.

– Providing anti-aging and fatigue reducing effects
The fungus works as an antioxidant and increases cellular formation, especially in the elderly patients. It also promotes more restful sleep, soothes the nervous system, and reduces anxiety, thus working as a sedative.

– Improving the respiratory function
Cordyceps shows good results in fighting against cough, chronic bronchitis and asthma, since it relaxes bronchial walls and has anti-inflammatory properties.

– Enhancing cellular oxygen uptake
This benefits all the body systems, giving them more energy and vitality.

– Protecting liver and kidneys
Cordyceps improves blood flow to these organs (as well as to the others), which results in their better activity and ability to fight the diseases, including Hepatitis and chronic kidney disease.

There are no reviews yet.

Be the first to review “DXN Cordyceps Coffee 3 in 1” Cancel reply
About brand
DXN was founded by Dato' Dr. Lim Siow Jin, a graduate from the prestigious Indian Institute of Technology. Dato' Dr. Lim started the business in quest of the benefits of mushroom on human health. His deep interest and endless effort drove him to utilize the fullest potential of Ganoderma or Lingzhi, which is well-known as the King of Herbs, for human health and wealth, with the establishment of DXN in 1993.
Shipping & Delivery

Other states in Oman - 1.5 Rials extra 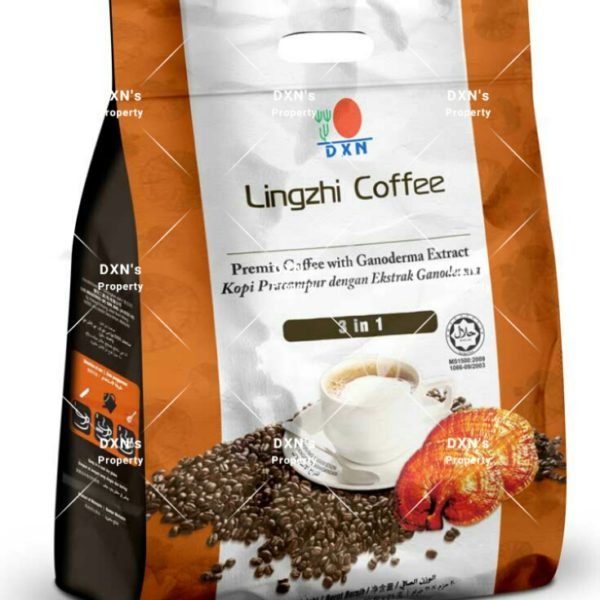 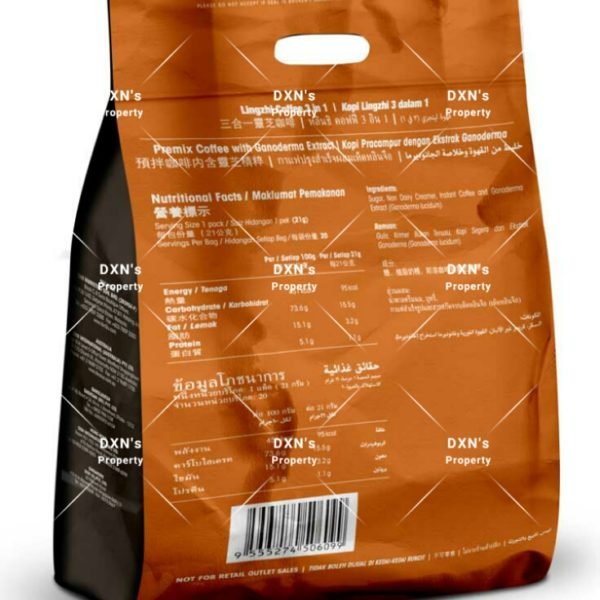 ر.ع.5.25
DXN Lingzhi Coffee 3 in 1 is all you need for a complete cup of smooth and delicious coffee. It is specially blended with finest quality coffee beans and 100% pure Lingzhi with no artificial colourings, flavorings and preservatives. Packaging Size: 20 sticks x 21g
Add to Wishlist
Add to cart
Quick View
-26%11 PV

ر.ع.3.80
Good news to coffee lover! DXN Cream Coffee is a harmonious blend of the fine quality instant coffee powder, Ganoderma extract and non-dairy creamer. Rich in aroma, silky smooth texture and the taste that you can't resist. No sugar added, recommended for those who want to reduce daily sugar intake. Every sip will be a pleasurable one. Packaging size : 20 sachets x 14 g 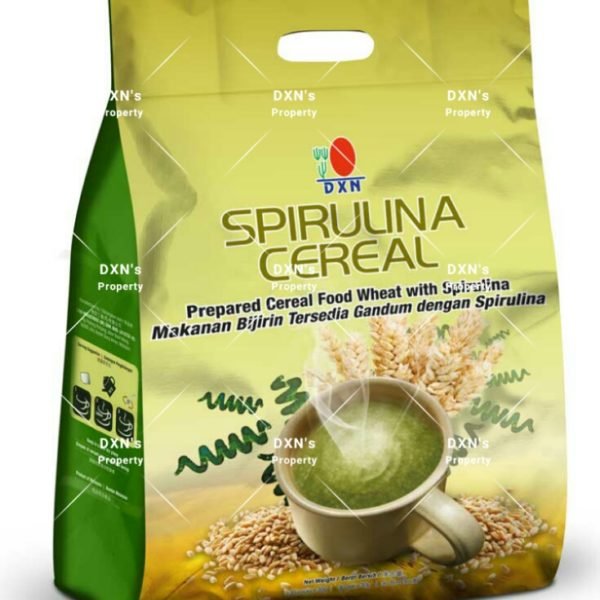 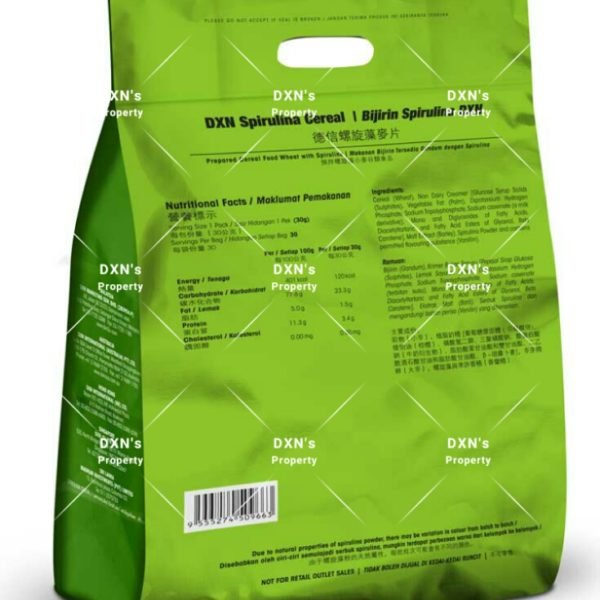 ر.ع.9.70
Spirulina is well-known as a balanced food while high fiber cereals are usually recommended by nutritionists. DXN Spirulina Cereal, made from high quality cereals and spirulina powder offers one of the best source of nutrition. Packaging size: 30 sachets x 30g
Add to Wishlist
Add to cart
Quick View
-24%14 PV 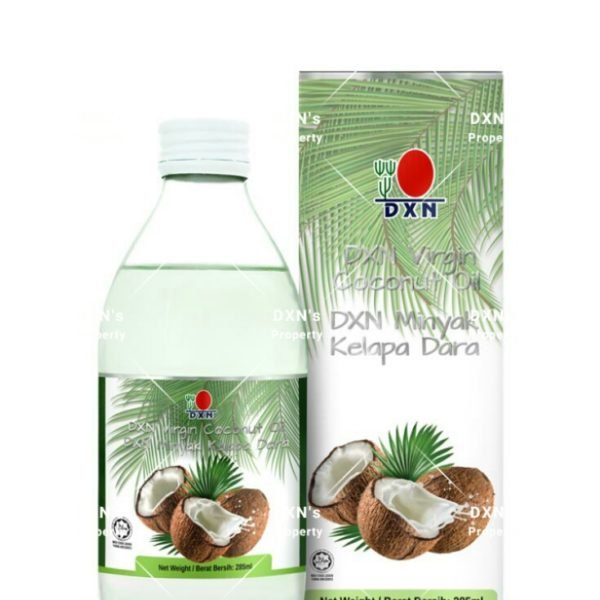 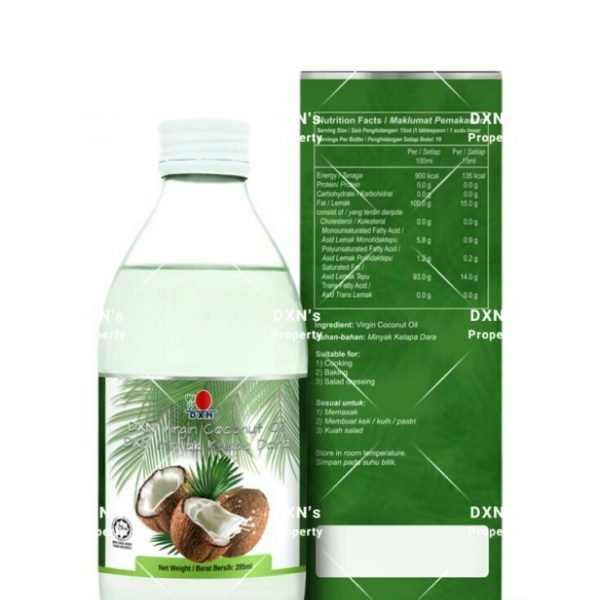 ر.ع.5.50
Here comes the DXN Virgin Coconut Oil. It is a high quality coconut oil extracted from the kernels of coconuts. It contains essential fatty acids especially medium-chain fatty acids which are easily digested and good for health. You can incorporate this product in your cooking or baking to produce a wide variety of delicious food. In addition, it is also suitable as a salad dressing to enhance the taste of the vegetables. The DXN Virgin Coconut Oil is available at your nearest DXN branch so do get a hold of it today. Packaging size: 285ml per bottle
Add to Wishlist
Add to cart
Quick View
-26%10 PV 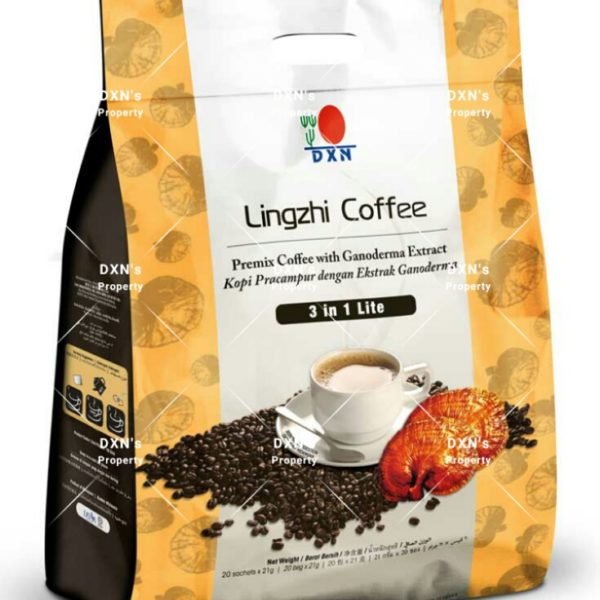 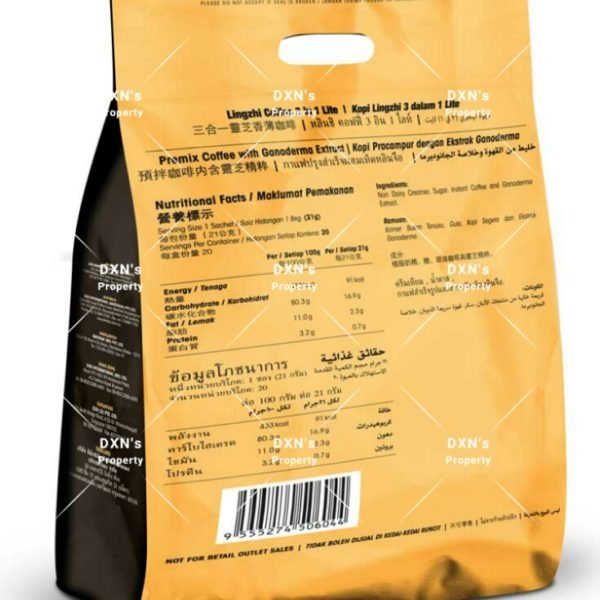 ر.ع.5.25
Everyone loves how easy it is to make instant coffee. If you prefer a little more creamy taste to your coffee, reach for our Lingzhi Coffee 3 in 1 Lite. It is another new variant of the DXN Lingzhi Coffee series which delivers a smooth and full-bodied coffee with an irresistible aroma. Just add one sachet of the Lingzhi Coffee 3 in 1 Lite into 150ml of hot water and stir to enjoy a sensational new coffee experience with DXN. Packaging Size: 20 sachets x 21g
Add to Wishlist
Add to cart
Quick View
-26%28 PV 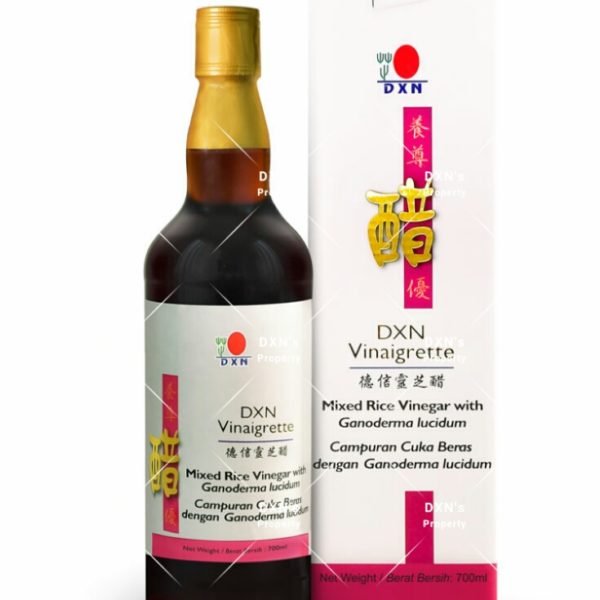 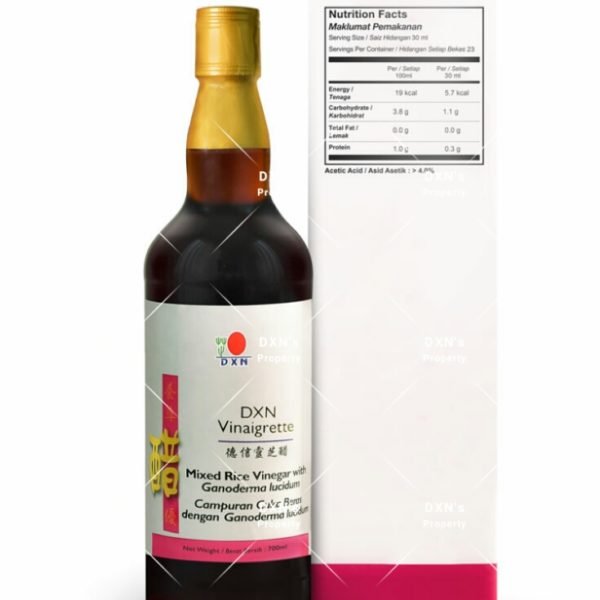 ر.ع.9.20
DXN Vinaigrette is made from selected rice vinegar and Ganoderma lucidum. It is fermented for years using traditional techniques to preserve its distinctive flavour and quality. DXN Vinaigrette is the right choice to improve your health. Packaging size: - 285ml per bottle - 700ml per bottle.
Add to Wishlist
Add to cart
Quick View
-27%17 PV 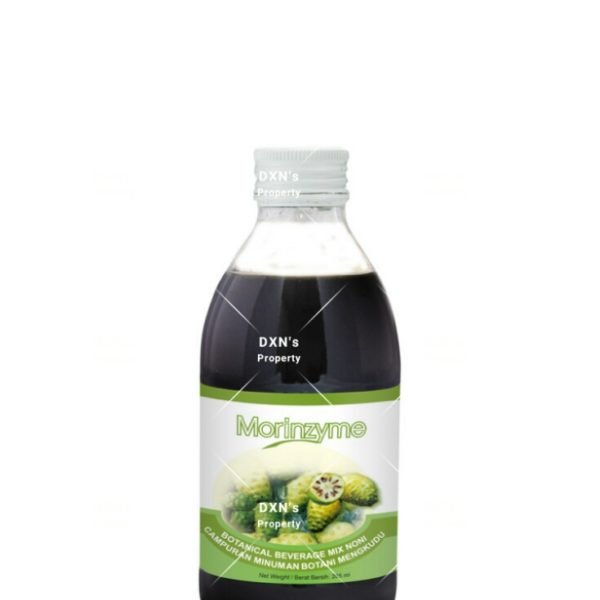 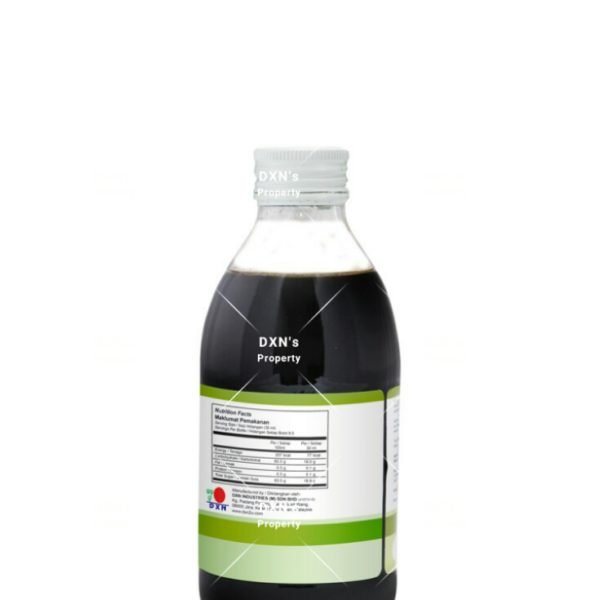 ر.ع.7.35
DXN Morinzyme® is a fermented Noni botanical beverage juice that is produced from the fermentation process of Noni concentrate. Fermentation can help to preserve the nutrients in the beverage and it also produces many enzymes. Enhance your life with DXN Morinzyme® daily. Packaging size: 285 ml per bottle

Add to Wishlist
Add to cart
Quick View
close
Start typing to see products you are looking for.